I recently wrote about 4 secrets to a successfully daily scrum, which covered the basics for ensuring a productive daily scrum meeting. However, what do you do if your team is distributed?

Start off by considering the following diagram adapted from Alistair Cockburn. 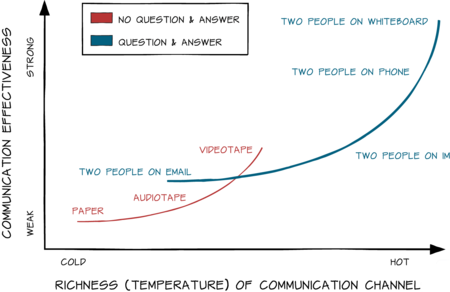 Good daily scrums have strong communication and a “hot” or saturated richness level. Why? Because the team is together, in person, talking to each other about a shared interest—their progress toward the sprint goal.

Some companies I work with, however, don’t have the luxury of meeting in person each day. Some teams resort to emailing a written daily update, which is better than doing nothing but not by much. Others upgrade to daily scrum meetings via voice-only phone calls. I recently worked with a team who did remote meetings like this. Five minutes after the meeting, I spoke with some of the team members—all of them had forgotten what the other team members were working on and what their issues were. It’s clear to me that phone calls do not result in very productive meeting.

To run an effective daily scrum meeting that achieves more of the richness and effectiveness that is often seen in a face-to-face daily scrum, a team should institute the following measures:

Too many times I hear that people can’t get hardware like webcams due to IT constraints, port issues, or whatever. You must. Not having them is a deal breaker. Asking remote teams to “do scrum” without investing in webcams and other key tools would be like buying a high-performance sports car but being too cheap to put in the highest grade fuel, then wondering why the car doesn’t run well.

Ideally, the daily scrum should happen at the same time, in the same place, every day. But if you have two or more teams, and one of those teams is 6 or more time zones away, there will have to be some give and take. For example, let’s say a company has outsourced work to a remote team that is 12 hours ahead of the onsite team. The onsite team is content to have the daily scrum at 9am every day, but the poor guys that are 12 hours away, well by 9pm, they’re winding down for the day. They’re tired. They’re not focused. They just want to get through the meeting and be done. To share the love, or the burden, shift the time – meaning each sprint you should alter which team has the late shift. If the remote team had it last sprint, the onsite team has it this sprint. If you are working in four-week sprints, you might need to switch more often. I know if you’re the customer, this might seem unfair. But while, yes, technically you’re paying the bill, everyone needs to share the pain of the time zone game.

The number one reason companies tell me that they have an offshore development center is to save costs. While that’s a nice thought, introducing remote teams across time zones only makes the costs go up. Poor communication, delays in decisions, and blocking issues that last for days instead of hours – it goes on and on. As I discuss in detail in Chapter 28 of _The Scrum Field Guide _, having a travel budget is essential for success with offshore teams. The daily scrum is no different. The best way to ensure that these meetings get off on the right foot is to gather both teams together in one location and spend time there. Let people get to know each other, hang out, better understand each other’s cultures, build trust, and become friends. Why? Simple! It helps build communication effectiveness and richness. I find people are more willing to adjust time or to hop on webcams when they are doing it for their friends, not just for some “other team”.

I often say to people do scrum “by the book and with paper.” Focusing on the basics and using lightweight, manual tools helps people to learn Scrum. But when you have remote teams, you need a software-based tool to keep the teams up to speed and in sync. The tool cannot and should not replace a daily scrum meeting; but it will allow the team to see progress during the day as things are happening at both sites.

Being part of a remote Scrum team is difficult. There is no doubt about it. Consider the ideas in my previous blog post, then factor in these four additional requirements. If you do, not only will your daily scrums be more effective, your teams and projects will be as well.